Frida Kahlo and Questions of Identity 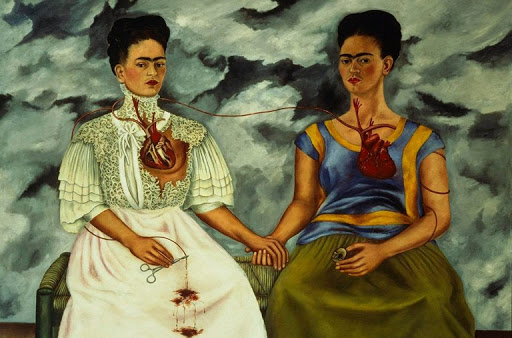 “1st.) I’m convinced of my disagreement with the counterrevolution — imperialism — fascism — religions — stupidity — capitalism — and the whole gamut of bourgeois tricks — I wish to cooperate with the Revolution in transforming the world into a class-less one so that we can attain a better rhythm for the oppressed classes
2nd.) a timely moment to clarify who are the allies of the Revolution
Read Lenin — Stalin — Learn that I am nothing but a “small damned” part of a revolutionary movement.
Always revolutionary, never dead, never useless.”

I’m not here to defend the legacy of someone who has been dead for over 60 years, nor am I going to write off Frida Kahlo based on the contradictions surrounding her persona. What I hope to do is engage on a more critical level on the questions of identity, race, post-colonialism, cultural appropriation, accountability, and historical understanding that circle such a popular and controversial figure like Kahlo. I think it’s important to grapple with these polarizing topics in good faith when dealing with our tremendous task of decolonization. What can we learn from such an idolized and commodified artist and public figure like Frida and how can we separate myth from reality?

Frida’s History as a Communist

Undoubtedly, one can say that Kahlo was ahead of her time, or at the very least she did not abide by the status quo imposed on people of her class and social background. She is most commonly portrayed as a feminist, disabled, and lgbtq+ icon who toppled stereotypes around gender roles, sexuality, maternity, etc.; but she is much less portrayed as a radical political activist. 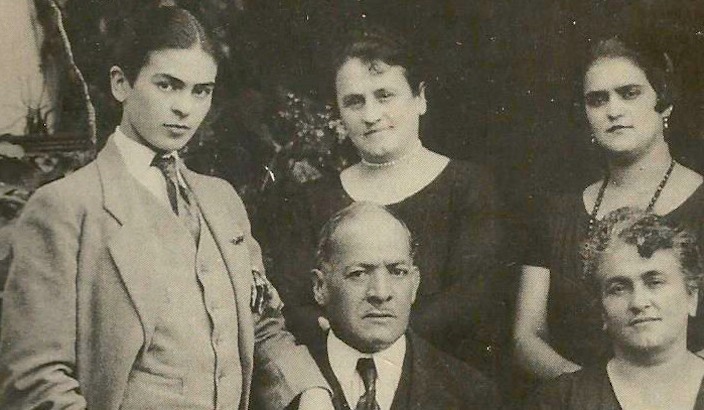 Although she was a mestiza from a privileged, Eurocentric middle-class family, she openly expressed her dissent of rich people, religion, “gringos”, and the United States. Nevertheless, she was raised with a sense of entitlement and ambition — traits most likely influenced by her father, a well-known and highly-educated photographer, and immigrant. Consequently, at the age of 14, she was one of only 35 women to be admitted into the elite Escuela Nacional Preparatoria in Mexico City at great cost to her family, where she had planned to study medicine. That is before the tragic bus accident at the age of 18 that left her with a lifetime of pain and complications. It was in school that she first became involved in revolutionary politics, becoming a member of “Los Cachuchas”, a campus-based radical group that read Lenin, Marx, Hegel, Kant, Russian literature, and Mexican fiction and played pranks on conservative teachers. Frida was heavily inspired by the Mexican Revolution and had profound and heated debates with her peers who came from the most elite families in the country.

“My childhood was wonderful even though my father was a sick man (he suffered from vertigo every month and a half). He was the best example for me of tenderness and workmanship (also a photographer and a painter) but above all understanding for all my problems which since I was four years old were of a social nature…. I saw with my own eyes the clash between Zapata’s peasants and the forces of Carranza…. My mother opened the balconies on Allende Street getting the wounded and hungry and to allow the Zapatistas to jump over the balconies of my house into the ‘drawing room.’ She tended their wounds and fed them corn gorditas — the only food available at that time in Coyoacan….. The clear and precise emotions of the ‘Mexican Revolution’ that I keep were the reason why, at the age of 13, I joined the Communist youth.”

By her early 20s, Frida would join the Mexican Communist Party (PCM) and become an active member; giving speeches, attending meetings, and leading union rallies for the majority of her life. On July 2nd, 1954, just a few days before her death, Frida joined the protest against the United States’ led coup in Guatemala in a wheelchair, and against her doctor’s orders.

This article offers more details on her political activity as a communist if you’d like to learn more! 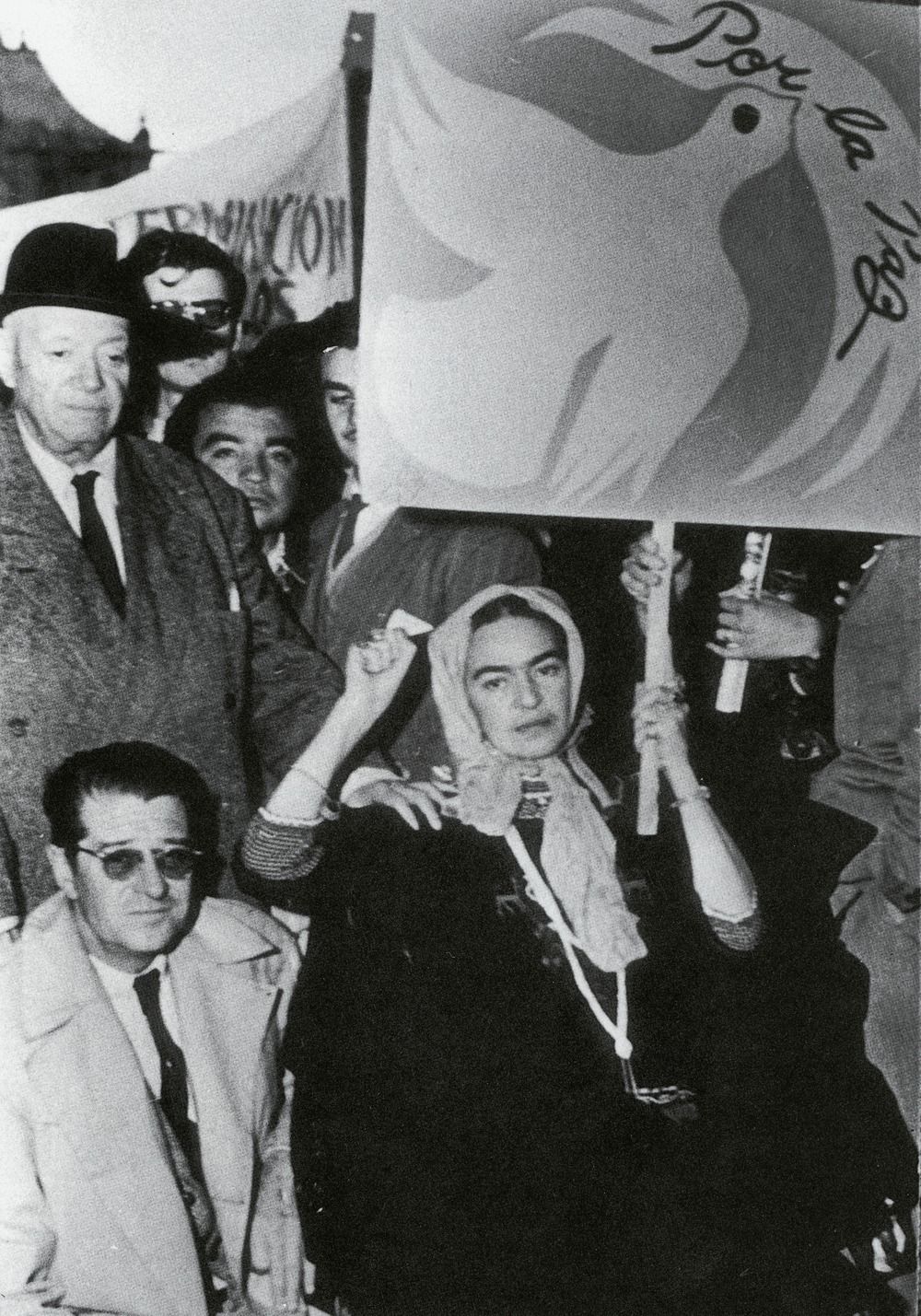 Her wish to “cooperate with the Revolution in transforming the world into a classless one”  is evident in her political work and writing, but is it evident in her personal life and her work as an artist? This becomes a bit of a gray area, especially because she amplified and became popular for her use of Zapotec and other indigenous culture, in her work and identity, despite not being part of that indigenous community, but rather participating extensively in eurocentric,  cosmopolitan circles. Frida is full of contradictions, and isn’t free from criticism, especially coming from a 21st-century perspective, but it’s important to acknowledge her from the historical lens she was a part of, and not fall into the trap that is purist politics. Yes, she could have done more to empower indigenous people and advocate for indigenous rights rather than claim them for her personal exploration with identity, but we can’t say she completely sat on her privilege. She was a disabled, queer, femme, and outspoken communist and artist in an otherwise hostile, able-bodied, and fiercely anti-communist and anti-indigenous world. The Mexican Revolution, the first of its kind in the twentieth century, dominated the political and cultural landscape of that time, and Frida was inspired to embody its ideals of resistance against colonial and imperialist powers. Also, a post-revolutionary Mexico City created a unique political, intellectual, and artistic climate that attempted to promote indigenismo and mexicanidad – movements with strong inclinations toward the native that rejected the imperial West, and which gave birth to the Mexican Renaissance, the muralist movement that took place between 1920 and 1950. 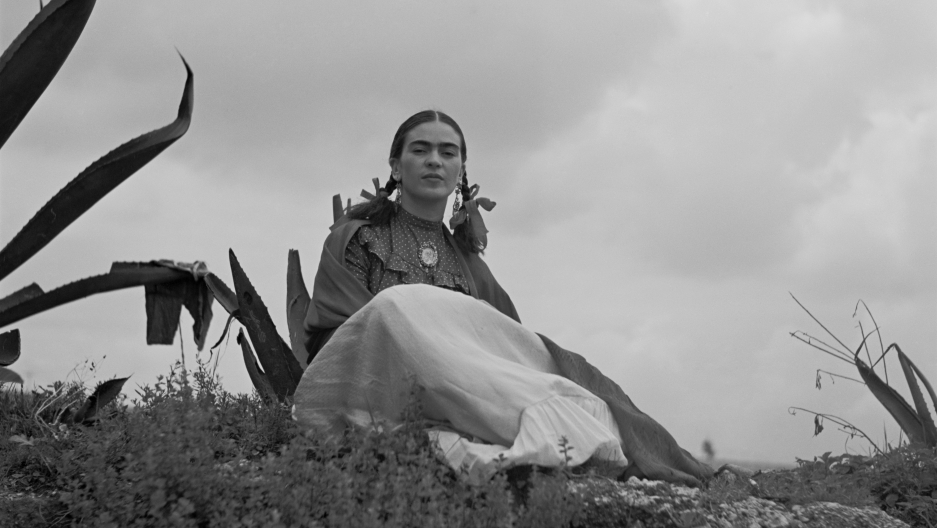 Frida’s and Our Own Roles in Post-Colonialism and Late Stage Capitalism:

However, we cannot deny that European intellectualism still remained in this post-revolutionary era of modern cultural revival and nationhood in Mexico. How were indigenous identities and cultures appropriated, erased, and neglected in this process of post-colonialism, and who ended up benefiting the most? Given her class, and euro/white-passing privilege, Frida Kahlo undeniably benefited in many respects, but how much ownership and control of her legacy and narrative did she actually have, and how has it been distorted and commodified after her death? Frida Kahlo has been subject to global scrutiny, commodity fetishism, and commercial hyper-exploitation in levels unlike anyone else in history. As an anti-capitalist and someone who genuinely found pride in the indigenous roots of her country, is this really something she intended and would have approved?

Most importantly, how can we differentiate from dishonorable reclamation vs. appropriation, especially given the reality that many of us have also faced the destruction or disruption of our identities by white supremacy? How many “rights” do we have within our own construction of identity within post-colonial conditions? We cannot deny that similar iterations of Frida’s attempt at “decolonizing” herself and reclaiming ancient indigenous roots are apparent in a lot of today’s spaces. When is it problematic and when is it justified? Most importantly, when and how does this reclaiming, exploration, and experimentation with identity and history actually act as antagonism, erasure, and violence against actual indigenous people and communities? Is it possible to test the boundaries between accountability and historical understanding? What can we learn from Frida as a person, and most importantly as material culture in a time when ideas around decolonization, racism, colorism, and identity seemed more heightened than ever before? How can we apply that knowledge and experience to today’s fevered climate around these same topics? How can we acknowledge the impact of our ancestors despite the limitation of never being able to fully engage with their stories? 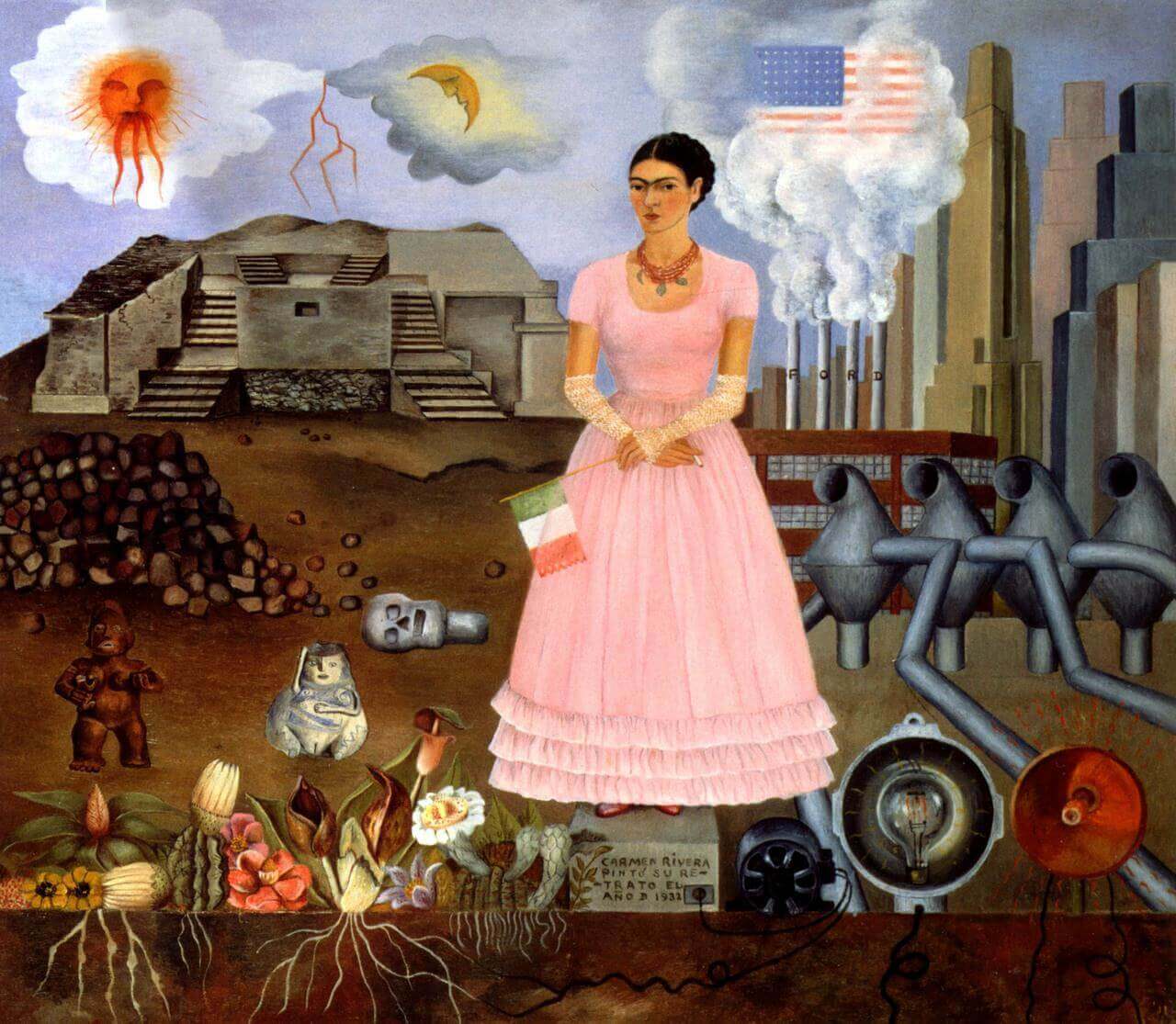 What Can We Learn From Frida in Our Own Process of Decolonization and Reclaiming of Identity and History?

As I stated at the beginning of this article  I don’t have the answers to these questions, but I hope I can create dialogue and insight around this discussion. Personally, given what I know about her, I don’t think Frida Kahlo’s intentions were coming from a bad place, although perhaps they were coming from a privileged and idealistic place. However, given all that she accomplished as an artist and as a political organizer despite her tumultuous relationships, chronic pain, and medical hardships, I believe Frida Kahlo was a class traitor and a true ally. Frankly, I think she’s less problematic and far more revolutionary than many celebrities we uplift today. We cannot deny she had some sense of awareness around ideas of colonization, racism, and capitalism and was trying to envision a better world that fought against these struggles, even if her theory often contradicted her practice:

Before it was my earliest experience — I am only a cell in the complex revolutionary mechanism of the peoples for peace in the new nations, Soviets — Chinese — Czechoslovakians — Poles — united in blood to me. And to the Mexican Indian. Among those great multitudes of Asian people there will always be the faces of my own — Mexicans — with dark skin and beautiful form, with limitless grace. The black people would also be freed, so beautiful and so brave. (Mexicans and negroes are subjugated for now by capitalist countries above all North America — U.S. and England.)

She certainly wasn’t perfect, but I wonder how we would be talking about Frida today if the education and awareness we have constructed in the last few decades were apparent during the time she was navigating the world. I don’t believe in idolizing historical figures or measuring them in totality, but it’s important to analyze the impact they left, the historical context they lived in, and the revolutionary theory they practiced. Revolutionaries aren’t mean to represent us — they are meant to teach us to construct our own identities, modes of representation, and praxis. Let’s learn from it. How are we actively fighting against colonialism, imperialism, anti-indigeneity, and anti-blackness? What can we learn as artists and as revolutionaries from these past projects of identity and decolonization in order to improve our current revolutionary praxis? How can we uplift the most marginalized? I know my hope is to build a classless society. I also unconditionally support indigenous sovereignty and a nation’s right to self-determination. I know the only way these things will be possible is through black and indigenous-led movements against national, racial, ecological, and economic oppression. My only hope is to be able to always be revolutionary, never dead, and never useless in this process. Just as Frida attempted to be. 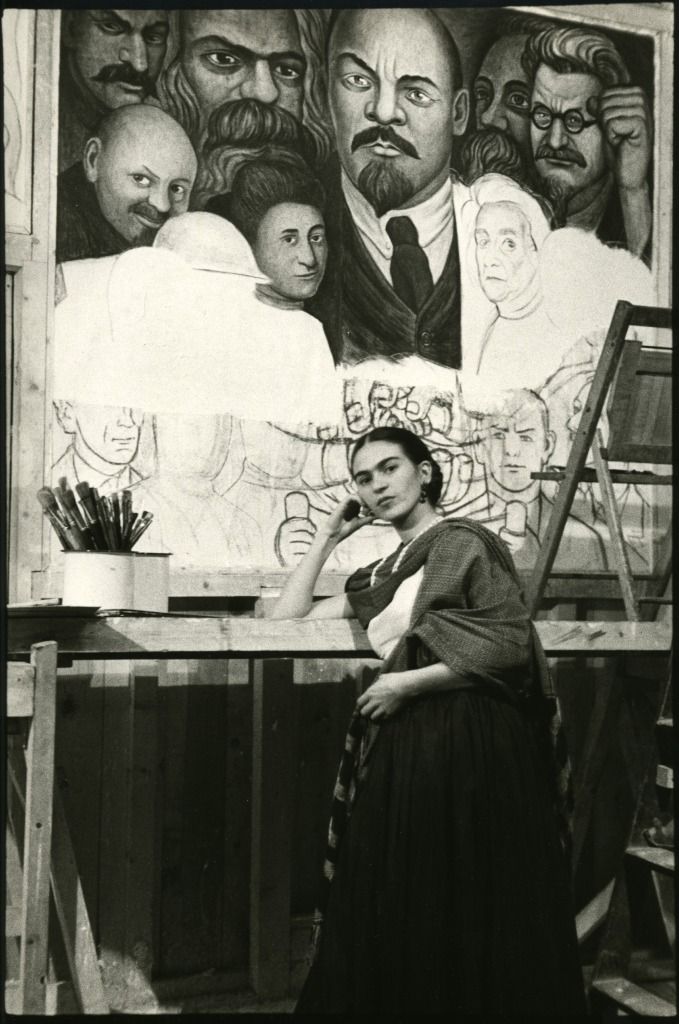